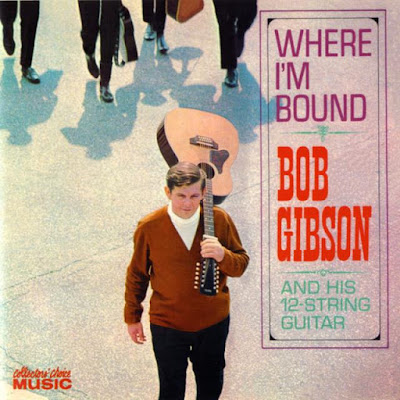 This is a picture of one of the greatest folk albums that you may have never heard by an artist that you may have forgotten. Before the other Bobs (Shane of the Kingston Trio, Flick of The Brothers Four, and Dylan of Greenwich Village and points west), there was Bob Gibson, who sang, picked, and strummed his take on folk music into the consciousness of more young musicians than any other soloist of his era except for Pete Seeger himself. On our KPFK radio folk show last Saturday, my friend and co-host Art Podell (formerly of Art&Paul and the New Christy Minstrels) remarked that Gibson's work was the thread that ran all through the entire folk movement, and this is easy to demonstrate. Take a look: 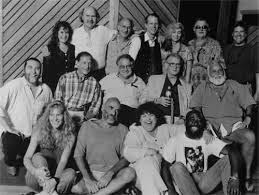 This is an assemblage of musicians in Nashville in 1994 who gathered for a fundraiser for Gibson's medical expenses in what would prove to be his final illness (he died two years later). They called it a "class reunion" because all of them owed at least some of their musical development to Bob. Yes, that's Tom Paxton, Peter Yarrow, John Hartford, and Emmylou Harris in the back row, Oscar Brand and Ed McCurdy flanking Gibson center with Glenn Yarbrough on the right, Shel Silverstein and Josh White, Jr. in the front. You could easily add John Denver, Gordon Lightfoot, and Leo Kottke to the group because all have acknowledged patterning their 12-string guitar styles after Gibson. To say that it is an impressive group is to beat understatement to death.

I wrote a bit about Bob Gibson last April in an article about his song "To Morrow", and the details about his career and his arrangement of that number are there to see. I want this week's post to be about his music because it is not heard nearly widely enough any more. Gibson's daughters (one of whom is prominent folk performer Meridian Green, who toured with her father and Tom Paxton in the 1980s) have a wonderful site in his memory called Bob Gibson Legacy, and it is more comprehensive than I could ever hope to be. They have uploaded some fine performance videos on YouTube here, but they have disabled "embedding" so I cannot post them to appear on this page. Too bad, because they include some of his best songs.

But we have some quality Gibson material to post nonetheless, as well as some fine versions of several of his compositions by other groups. I want to start with the title song from the album above - though since this article was written, that video has lost its embeddable status, so here is the link to YT - well worth a click:

He could absolutely play the hell out of a 12-string. On Where I'm Bound he has a "12 String Guitar Rag" that'll flatten you - and if you want to hear the roots of what Lightfoot, Denver, and Kottke have done with the instrument, that number is a must-listen. The entire album can be downloaded for about $8 on Amazon, and as soon as I finish this post, it will become the first entire .mp3 album I will have purchased on the web.

One of Gibson's best-known and most-often covered compositions is the modern spiritual "Well, Well, Well," which he composed and performed with Bob (Hamilton) Camp for the first time at the 1960 Newport Folk Festival:

The uploader implies that this is the recording from the duo's legendary At The Gate Of Horn album, but let me assure you - this is the Newport recording, with Dick Rosmini (another fabulous 12 and 6 string guitarist) and bassist Herb Brown backing them up.

One of the best-loved cuts from the Horn album was Gibson's "Civil War Trilogy," the middle song of which ("Yes,I See") was the title song of Gibson's previous album.

As I noted in the article on "To Morrow," Gibson launched the career of the then-eighteen year old Joan Baez by bringing her to Chicago to open for him at the Gate of Horn (of which Gibson was part owner) and then with a dramatic showman's flair bringing her up from the audience to sing with him at the first Newport Folk Festival in 1959. This song was the first time that most of America would learn of Baez's incredible voice:

I posted this version of "Good News" when I wrote the article on the song - but you just can't write a post about Bob Gibson without a banjo song with BG's Seeger-influenced audience involvement approach:

Gibson could also write wonderfully tender songs as well, and our first venture into a Gibson number performed by other artists is this version of his "Blues Around My Head" by the Chad Mitchell Trio from their live At The Bitter End album:

That outstanding album also included another Gibson composition, likely his other most often covered song, "You Can Tell The World." The CMT did a bang-up job on the song - but so did Australia's Seekers, a group strongly influenced by Gibson. They also performed nearly his exact arrangement of "This Little Light of Mine," which you can check out in my article on it here. But for now - The Seekers with "World" -

Simon and Garfunkel from their first album with their version:

And again, from our friends from the University of Tennessee, the Cumberland Trio, veterans of Hootenanny and a successful showbiz run for several years, here from their 2004 reunion concert:

It would fall somewhere between truism and cliche to say at this point that fame is fleeting and that all things must pass. But I find that of all the artists of the 50s and 60s whose music has been overshadowed by what passes as pop culture today, it is the neglect of Bob Gibson that is personally especially painful for me. I spent an incalculable number of hours as a boy reveling in the virtuosity, the scope, and the sheer ebullient love of life of this man's music. I saw him in person a few times as well, later in the 70s while he was battling his various addictions. When he got up to perform, though - all the trouble fell away, and he became the one and only Bob Gibson, master folk performer, who deserves much better of a world he helped to enrich with his talent.