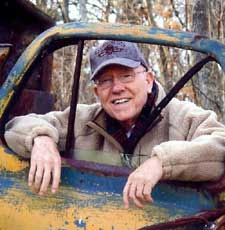 Most Kingston Trio fans know the story of how "The Reverend Mr. Black" became a hit single because it was related expertly in the Blake, Rubeck and Shaw The Kingston Trio On Record. The short version is that a high school English teacher in Chicago was trying to instruct a class in the ways in which small groups could manipulate mass media, so he had his 95 students pick what they deemed as the worst and most obscure cut from a record album that they could find and try to promote it into an attention-getting hit. The students chose this song from the respectably-selling 1963 album #16 and immediately began flooding Chicago station WLS with calls requesting that the station play the number.

Now WLS was much more than the Windy City's most prominent Top 40 station. Along with Pittsburgh's KDKA and a handful of other mega-powerful 50,000 watt stations, its signal blanketed the central third of the country and had already contributed enormously to popularizing country music in the 30s and 40s with its "Barn Dance" show (among others). Owned initially as it was by mid-America's champion of retailing, Sears Roebuck, whose logo "World's Largest Store" gave the station its call letters, it possessed a huge influence in the music industry. If WLS said a song was a hit - it was a hit.

Capitol Records recognized that power, and largely at the insistence of WLS released "The Reverend Mr. Black" as a single. It reached #8 on the national Billboard singles Top 40 chart, the only KT single record after "Tom Dooley" to reach the Top 10.

But the fact that a few score phone calls from teenagers had a part in creating a hit record does not, in fact, tell the whole story at all. They may have tricked WLS and Capitol into thinking that there was hit potential in the song - but over 400,000 units of the recording were sold, and that didn't happen because of a high school English teacher. It happened because of the pedigree of the song itself and because of a rockin' good performance of it by the Kingston Trio.

We know that the song was penned by the great Billy Edd Wheeler (above) and Jed Peters, but as Wheeler explains, he had some pretty heavyweight help. The "Jerry and Mike" he alludes to here are none other than Lieber and Stoller, one of the greatest pop music writing duos of all time ("Hound Dawg," "Stand By Me," "Kansas City," "Jailhouse Rock," and dozens of others).

The other part of the pedigree and possibly the more significant one is that the root song is "Lonesome Valley," one of the best-known of the gospel hymns copyrighted by A.P Carter in the 30s and sung by the original Carter Family (though it's one that AP credited as "traditional"). By the time that Wheeler's song was muscled into public attention more by the KT's star power than by a few students, millions of Americans had already heard the chorus on the radio and from gospel choirs in their local churches. I'd bet that the Trio's decision to include a back-up group of gospel-ish female singers on the record stemmed in part from that and in part from the fact that Bob Gibson's wonderful 1961 album Yes I See (a real stunner if you've never heard it) had sold very well and included the Gospel Pearls quartet as back-up singers on about half of the songs to great and original effect.

So here's the Trio with as we-all-know-now-but-didn't-then Glen Campbell on banjo:

It was this song as much as any other that saddled John Stewart with the "Johnny Cash sound-alike" tag, which wasn't really fair because Stewart had a more mellifluous and on-pitch baritone than Cash did. Given the obvious similarities, though, I always thought that Cash was tipping his hat to Stewart when he recorded it years later:

For an interestingly different version, here is actor and singer Tim Grimm from Indiana. Grimm has a great resume as an actor and records for Allan Shaw's Wind River records - this is a slower, softer, more reflective take:

"Lonesome Valley" itself has been covered repeatedly and beautifully by some of the greatest folk artists of the century. First up, a later incarnation of the Carter Family, Mother Maybelle with sisters June, Helen, and Rosey with Johnny Cash on harmony, from the 1980s:

Next, as far as I'm concerned, my "find" of the week - Joan Baez with the recently departed Mary Travers at the 1966 Newport Folk Festival, a real gem:

Pete Seeger and Arlo Guthrie with Pete leading the audience, from about 1990 I'd say. 'Nuff said:

Speaking of classic - the first folk blues artist I ever heard (in the Newport recordings from 1960-61), Mississippi John Hurt:

Closing here with the most soulful version I've heard from the gospel Fairfield Four, as heard in O Brother Where Art Thou?

I'm out of space - so in the words of a comment on Tim Grimm's video - "nice job﻿ guys! make this kind of music live on!" Amen.

The current Kingston Trio recently uploaded a video of their performance of the classic - a nice update to the original KT recording. George Grove is doing a remarkable re-imagining of the banjo part from the original - remarkable because on the '62 disc, Glen Campbell was playing a six-string banjo tuned like a guitar. George gives it better tonality and a more authentic banjo sound on his Vega longneck:

Unbeknownst to me until today, a year and a half ago some blessed soul uploaded Billy Edd Wheeler's original recording of the song to YouTube. And a fine version it is, demonstrating not only Wheeler's performing chops but also the fidelity that the Kingston Trio's arrangement maintained to the original: