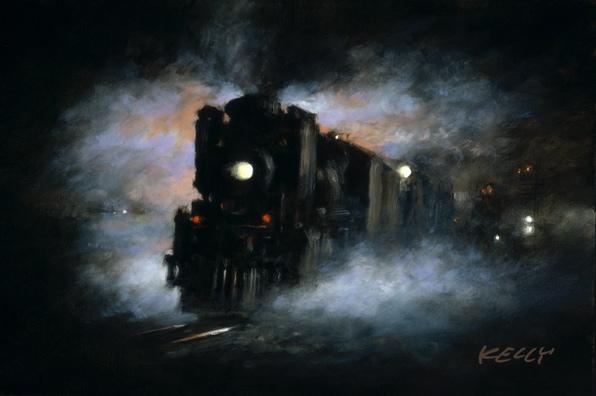 "The fastest train I ever did ride,
Was a hundred coaches long,
And the only woman I ever did love,
Was on that train and gone."

"Who's Gonna Shoe Your Pretty Little Foot?" is a typical American lost love folk ballad, generally similar to and possibly derived from its sister songs, the rather older "I Never Will Marry" and "The Butcher Boy/In Tarrytown I Did Dwell," both of which boast pedigrees that go back to the British Isles. "Pretty Little Foot," though, is in its present form attributed to and copyrighted by Woody Guthrie, who typically and honestly notes in the copyright "Words and Music Adaptation by Woody Guthrie."

Both lyrics and melody indicate why Guthrie did so. The "who's gonna shoe your foot/hold your hand/be your man" sequence appears in several Appalachian ballads and reels; "the only girl/boy I ever loved is gone" on some train or other likewise keeps popping up, most prominently in the first verse of the closely-related "I Never Will Marry," whose melody has the same structure as Guthrie's. No one better to present that one than a very young Joan Baez, from early in her career when her repertoire consisted primarily of traditional songs:

Baez is still learning to play guitar at this stage, and she is having some difficulty making her modified Travis-style picking fit with the 3/4 time that "Marry" and "Shoe Your Foot" share. That's a "waltz" tempo, a 1-2-3 1-2-3 rhythm that is clearer and audible in Guthrie's own recording of "Shoe Your Foot":

Guthrie is likely drawing on the older "There's More Pretty Girls Than One," a 19th century song recorded early in the 20th by both the duos Alton Delmore and Fiddlin' Arthur Smith and Rutherford & Foster, whose version is here:

A more contemporary take on "Pretty Girls" by Lyle Lovett with Alison Krause:

Both "Marry" and "Shoe Your Foot" have evolved into gender-neutral songs, performed with slight lyric alterations by performers of both sexes - though if I were a betting man, I'd wager that the root song of "Foot" was from a masculine perspective and feminine for "Marry" even though early published versions of both were male-oriented.

The Browns had a number of folk-oriented hits in the 1950s, one of which is this combined m/f vocal:

The Weavers also combine the male/female voices to good effect, and the instrumental skills of Pete Seeger and Fred Hellerman are on display as well:

Great harmonies here, and note that the Weavers are combining "Pretty Girls" with Guthrie's "Shoe Your Foot" to come up with a new song - and a new copyright.

One good theft deserves another, which is pretty much what the Kingston Trio's Bob Shane and his friend and songwriting partner Tom Drake did to create "Who's Gonna Hold Her Hand?". The Kingstons always acknowledged the primary influence of the Weavers, and note that this KT number follows the Weavers tune almost exactly, significant because the latter group clearly made minor changes in the line length from the older songs:

Musically interesting for the seventh chord that the group adds to the end of the fourth line of each verse and chorus, the cut also represents what enraged traditionalists about KT adaptations. The new lyric explores pretty much the same emotional geography of the original songs, but the "oooh" background vocals violate traditional standards and identify this effort as the 1950s pop ballad that it really is.

Interestingly, pop vocal harmonizers extraordinaire Phil and Don Everly present a version much closer to the traditional, accompanied by a single guitar:

Of course, the Everly's alteration of the last line to "I'm gonna kiss your ruby red lips" takes the melancholy out of the song and stands it next to the KT in the 1950s ballad folder of the American musical archives.

This would seem to be the inspiration for the Everlys. The arrangement Page is using here combines a touch of the old-timey with the harmonica but otherwise goes for the full-on 50s pop orchestra and chorus - nice version nonetheless from 1965.

"Who's Gonna Shoe Your Pretty Little Foot?" and its associated songs represent much of what I like about folk music and explains why this blog just keeps going and going. The variations are all interesting musically entertaining, even the 50s pop versions. I could wish that more of today's acoustic songwriters would more frequently mine the rich and largely untouched veins of American folk gold for some of their melodies and themes.

Great article that I just happened to stumble across while doing research for my own blog, as I just happened to be writing about an album from The Browns that feature this song. I never knew anything about it, before now, other than it was very old.

Excellent information!
Nevertheless Patti Page's version is not an example of music from the fifties: she recorded the song in 1965.

Ah, thanks Amand! I will rectify the error in the post when I get the chance.

And I hope i replied to Mike back channel - checked out his blog and really enjoyed it!

Hi Jim: I'm pretty sure the unusual chord at the end of each third line (not fourth) is G Minor (when playing in the key of D). Regards, Pete Curry

So I just happened to purchase a mint unused LP of 'Immortal Woody Guthrie Golden Classics" With Woody and Cisco singing this version:

The fastest train I ever did ride,
Was a hundred coaches long,
And the only woman I ever did love,
Was on that train and gone.