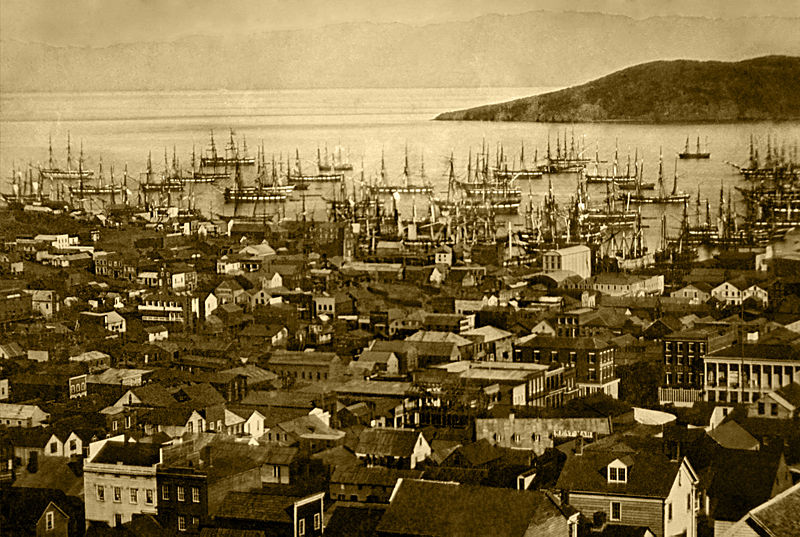 Capitol T996 "The Kingston Trio" was reputed to be producer Voyle Gilmore's favorite effort of the 21 or so KT albums that he oversaw, and in all its monaural glory still ranks as among the Trio's best efforts. The eclectic mix of the contemporary ("Fast Freight" and "Scotch and Soda"), the novelty ("Three Jolly Coachmen," at least in its droll presentation), the foreign language ("Coplas"), the calypso ("Banua," "Bay of Mexico," and "Sloop John B") and the dramatically re-imagined traditional ("Tom Dooley," "Saro Jane," and "John B") is a great collection in and of itself, and in addition sets the general pattern for most all of the albums released by the original group of Bob Shane, Nick Reynolds, and Dave Guard.

The old Gold Rush era sea chantey "Santy Anno" is an excellent example of the the way that the musical imaginations of three very young men [with a great add-on by Gilmore] transcended the simplicity of the original source material to produce something new and exciting. [Gold Rush era San Francisco Bay, above]

The origins of "Santy Anno" are obscure - English certainly, but possibly Irish before that - and clearly adopted by American round-the-Horn sailors - the Weavers' version (immediate antecedent of the KT begins "From Boston town we're bound away..." following the text of one of the published Lomax versions). Further, though the English might well have cause to celebrate an enemy of their former colonies, why Americans would take to their hearts a song whose chorus refers to a widely-hated figure (even in his own country) is equally mysterious.

Antonio Lopez de Santa Anna, general and several times president and dictator of Mexico, was an arrogant, self-important figure. An officer of limited skills (his victories over the Spanish, the French, and rebels within his own country seem frequently to have been products of good luck rather that tactical skill), his subversion of the Republic of Mexico's 1824 constitution (the flag over the Alamo was the Mexican tricolor with the usual eagle/serpent design replaced simply by the date 1824) undermined the brief, flickering possibility for land reform in that country and is the grandparent of the unending widespread economic problems in Mexico to this day.

The Kingston Trio's version is a gem. Gilmore's abovementioned contribution is Buzz Wheeler's wonderful bass run as an intro that presages the dark shadings of the minor key of the song; Gilmore insisted that the album should include Wheeler, whom Gilmore had heard accompanying the group in its first serious professional engagement at San Francisco's Purple Onion nightclub, where Wheeler was the house bassist. The Trio's vocals have the almost hushed urgency that I  love about so many songs on that first album - "John B,""Fast Freight," and "Tom Dooley" especially. No banjo here - but a ton of energy:

Perhaps the best-known classic folk performance is by Odetta, who combines basic instrumentation with a thrilling vocal:

For another take on the song (and please overlook the weird and incongruous anime/manga images), here is a marvelous Seattle-based group called Northwestern Musicians on the album Victory Sings At Sea.* This sounds like the British version of the song - and note how many verses here appear in another KT song from Capitol 996 - GREAT vocals here:

I'd thought this was a completely original arrangement - and then I heard Liam Clancy with cousin Robbie O'Connell and son Donal. And typical Clancys it is - less polished, more direct, and undeniably energetic:

I was delighted to see in the late 90s that former Trio member John Stewart returned to his folk roots with a group called Darwin's Army, which  included Stewart stalwarts John Hoke, Dennis Kenmore, and Dave Batti (all currently touring as part of the John Stewart Band) and John's wife Buffy. They have a classic version of the song, contributed by Kingston Crossroads message board regular Mr. Banjo:

For the more contemporary minded - Nebraska folk-punk (that's what they call themselves) group The Killigans, who put this on a CD. Note their incorporation of the KT/Buzz Wheeler closing riff here:

Finally - a really interesting variation - Spanish-French singer Hugues Aufray, who actually had a hit with this, singing it at his farewell concert in 2001 - in French:

Stan Hugill, himself a former sailor in the last days of the age of sail and who referred to himself as "The Last of the Shanteymen," named an entire category of sea songs the "Santy Anno group," which included "Lowlands" and "Bay of Mexico" and "Away, Rio" - all of which have a punctuating refrain like "Way up, Susianna!" and "Heave away, Santy Anno" and "Away, Rio!" The darkly mysterious power of this old song, performed with gusto and drama as we can hear in the renditions above, assures that we will be hearing it for a long time to come.

I just found that a few months ago, some kindly soul had uploaded The Weavers' version of this marvelous song - and it was that version that is clearly the direct inspiration for The Kingston Trio. The Weavers at their best:

I have since found out that the commanding lead vocal in this version is by the redoubtable Hank Cramer, one of the Pacific Northwest's finest folk performers (and busiest, looking at his performing calendar). I think this arrangement and Hank's singing make this the best rendition of the song currently available.
1 comment: