Dark Romance: "Blow The Candle Out" 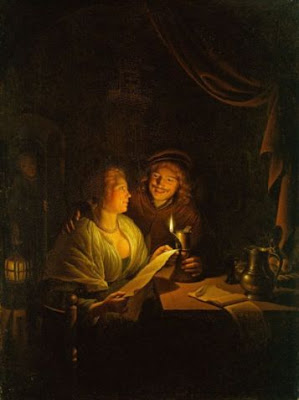 As early as 1959 in a Downbeat Magazine article, Nick Reynolds and Dave Guard of the Kingston Trio were frank in acknowledging that among the original three only Bob Shane had the chops to make it in the entertainment business as a solo - the chops being the voice, of course, but the guitar, personality, and looks as well. Yet Shane had the chance to make a good go of a solo career in 1968 and even had a promising beginning with the single of "Honey" - yet he expressed then and ever since that he preferred working in a group. There's no mystery there, I think, because as great a job with solos as Bob has always done, he has always been at his best working in and around harmony, and I believe he understood that he had found his corner of the music world, and it was spelled F-O-L-K, as he and Guard and Reynolds had redefined the genre, all protestations to the contrary.

Consider. Bob Shane ventured into show tunes and pop/blues/jazz with great solos like "Scotch and Soda," "She Was Too Good To Me," "When My Love Was Here," and so many more. But I always thought that Bob was at his most effective in the folkier numbers like "Stone" and "Candle." He is such a great singer that he was able to enhance a fairly mediocre boozy, bluesy bar number like "Scotch and Soda" and essentially trick audiences into thinking it was a great song simply because his performance of it was one of the best vocal efforts of the 50s (though don't forget - he also played that great guitar part as well). "One For My Baby And One More For The Road" the S&S song is definitely not - yet Shane elevates it into that level of the musical stratosphere by sheer force of talent.

When Bob had really good material to work with - "Maria," "A Rolling Stone," and "Blow The Candle Out," all of which are definitely in the folk-sounding bracket, the performances soared to a level unmatched by any of the other great folk voices of the time, among which I'd put Glenn Yarborough and Chad Mitchell and Tommy Makem. Sinatra and Tony Bennett could and did take successful shots at some of Bob's pop songs, and Bob could have handled much of their repertoire. But do you remember all the great baritones and second tenors doing pop back then? Jack Jones, Ed Ames, Robert Goulet, Bennett, Steve Lawrence, Andy Williams, Perry Como - as great and distinctive as Bob's voice is, it would have melded into that collage of performers. But in the folk world, Bob had only two serious challengers among baritones - the aforementioned Tommy Makem, who largely stayed within his Irish genre, and Cisco Houston, who died way too young and just as the Trio was peaking.

What I love about Shane's performance of this week's selection is the sustained sweetness and control of the vocal - it's a quiet song that still has an underlying sexual tension that Bob implies but does not exploit, making the song as beautifully romantic as anything he ever did. As we'll see below in both the lyrics and the other videos -no one else quite knows how to hit that subtle combination in their renditions.

"Blow the Candle Out" first appeared in print quite a long time ago, in 1724 in England with the original seaport town being London or Bristol. I've heard an Irish version that uses Dublin, and most American versions mention Boston. Shane is credited with re-writing the lyric and throwing in a parson where non existed in the original, which is more of a sailor's girl-in-every-port song rather than the romantic courtship and marriage piece that Bob presents. The original lyric included these two verses not exactly in the KT's performance:

I prithee speak more softly
Of what we have to do
Lest that our noise of talking
Should make our pleasure rue.
The streets they are so nigh, love
The people walk about
They may peep in and spy, love
So blow the candles out.

The sailor asks the girl to name the child after him (as in the KT's song) but leaves open the question of whether or not he'll ever return.

Here is the Trio's version, from the supposedly "dark" album Make Way, in actuality a thoroughly professional and satisfying musical offering:

All three Trio members are providing excellent instrumental support. As always, Dave Guard's lack of formal instruction on the banjo works brilliantly in his favor, as he lines out individual notes in a unique way - people just didn't do that on the banjo. Nick and Bob's harmonious guitar work compliments the banjo beautifully.

Our other performances of the song are talented amateurs, the best of whom I believe are England's Nancy Wallace and Jason Steel here:

Don Sineti and Steve Roys from Chicago's Maritime Festival go for a kind of art-folk ambiance with Roys' rounded baritone - pretty effective and I like the wash that the accordion lends:

Finally - the Sirens of Sterling seem to be a mid-Atlantic/New England group that performs at Renaissance fairs and pirate shows all through the area - I featured them on "The Gypsy Rover" a few months back. They get the tension but clearly aren't interested in matching Bob Shane's subtlety:

And a final thought that confirms for me that Bob Shane made the right decision in staying in the folk genre that he helped to define, at least as far as the recording industry is concerned. Have you ever seen Bob Shane performing without playing his guitar...seen him in a tux, cradling a mic with his hand in his pocket? Can you even imagine it?