And Justice For All: Woody Guthrie/Martin Hoffman's "Deportee" 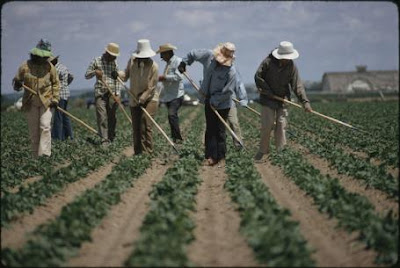 I'm not sure that Woody Guthrie ever wrote a piece more direct and powerful than "Plane Wreck Over Los Gatos," more commonly known by the more succinct "Deportee." I say "piece" deliberately because I learned via email a couple of years back from our good friend and too-occasional Xroads poster Peter Overly that Guthrie penned this and published it as a poem in the months following the incident, a January 28, 1948 plane crash in Fresno County, CA that killed 32 people, 4 American crew members and 28 Mexican farm laborers who were being returned to their country. It wasn't until nearly 10 years later that a Martin Hoffman (a teacher and someone I believe that Peter knows) put the words to music.

The incident is as described in the lyric, and I think most of us of a certain age are well aware of the braceros program of the 1940s through the 60s that set the stage for the disaster. The braceros (from the Spanish "brazos" or arms - Gregory Nava's powerful 1980s film El Norte makes an ironic comment on the word) were legal laborers who today would be termed "guest workers," though the use of "guest" obscures both the desperation of the people driven to this most extreme expedient to stay alive and the often harsh and dishonest treatment afforded them by the "hosts." A common trick of the time was to bring the low-paid workers over the border from Mexico with contracts that were intentionally flawed (in English) so that they would have no legal force. Following a season of backbreaking work in California's orchards and fruit fields, the braceros would at times be rounded up as illegals because of the invalid contracts and deported without being paid at all.

Even when the farm owners were just and humane - which I suspect they were far more often than they are credited for being - the wages were so low that the braceros would need to spend much of their money as a fee to a labor contractor to secure work for the next year's harvest.

But it wasn't that fundamental injustice that angered Guthrie the most, again as the song attests. Newspapers across the country reported the incident by naming the four members of the flight crew but listing the others as "deportees" - who were buried in a mass grave near Coalinga and only 12 of the 28 of whom were ever identified by name. (Until 2013, that is; please see the note below the post.)*

It was this dehumanization of flesh and blood people that stirred Guthrie to write his most directly polemical piece. I can think of no other Guthrie song so visibly angry or as direct as the last verse here is - "Is this the best way we can harvest our orchards?" His point remains well-taken, and whatever side of the ongoing and likely eternal and international dispute that you find yourself on, Guthrie's implicit plea for basic decency and humanity transcends the politics and is hard to deny.

We are fortunate to have recordings here of some of the major artists of our time performing the song, each in a style unique to their own form of music.

The Kingston Trio's arrangement from their themed Time To Think album is IMHO the best of their later years and one of the best of the whole initial ten year run. What makes it so, I think, are unique contributions from each member. John Stewart's lead vocal demonstrates the same youthfully idealistic passion that also characterizes another great cut on the album, Stewart's own "If You Don't Look Around." Nick Reynolds had a certain intonation in his upper register - a kind of wail, almost - that could sound impassioned and tragic (think of his marvelous vocal on "The Wanderer"). And Bob Shane's rhythm strumming (as well as the use of sixth and minor chords instead of the major chords of the original) is wonderful, creating the only recorded version of a song about Mexican people that actually sounds similar to a Mexican song:

Capitol Records Studio B never sounded better than it does here.

I suppose it might seem odd to follow this impassioned performance up with a version by Dolly Parton. But her diminutive size, kewpie doll looks, good humor, and decades of Johnny Carson jokes about her figure all may make us forget what a powerful singer and great performing artist that she is. She does the lyric here with a great artist's passion:

Arlo Guthrie here has his usual interesting take on one of his father's song - similar to dad's but still very much his own:

Now I don't know who Michael Pickett is - clearly a blue-eyed bluesman. But he does a flat-out sensational and mesmerizing blues version of the song, here from 2007:

At the dawn of his mega-popularity in 1981, Bruce Springsteen foreshadowed his later-developing interest in folk music leading to the 2006 "Seeger Sessions" CD and tour with this emotional (but truncated) bootleg from a Los Angeles concert:

Now for another duet, more musical - Arlo again with the angelic Emmylou Harris with the incredible Sam Bush on mandolin. This is how harmony is supposed to sound:

The Good Book asserts that "The poor ye have always with ye," and I suppose you could add immigration problems to that as well. But I don't think that the Biblical verse is a simple statement of fact - it's more of an indictment, and admonition, a call to action. In this song, using his own tools and talents, Woody Guthrie stepped up and answered that call.

In the four years since this post first appeared, ongoing research has finally established the names of all 28 of the Mexican workers who perished in the crash. They were -

The full story from The Los Angeles Times: "Names Emerge From The Shadows"

Certainly one of the most affecting and moving renditions of the song was recorded by one of our American masters and national treasures, Judy Collins. When I wrote this piece six years ago, Collins' version was not yet on YouTube, an oversight corrected in 2013. With thanks for the timely reminder of this marvelous version to my French friend M. Fanchbrezoneg:

I love Ely - will look for his version.