Tom Paxton's "The Last Thing On My Mind" 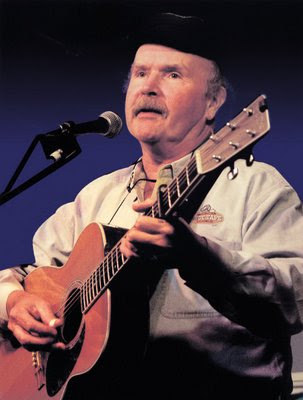 Tom Paxton is on the short list of the greatest singer/songwriters of the folk era, and I have always had the sneaking suspicion that his songs may well outlast those of some of the more topical writers of the period. If he has never been as highly regarded (to the point of adulation and near-idolatry) as Bob Dylan has, and if he never generated the record sales of John Denver or James Taylor, he nonetheless has created a body of work that in its elegant simplicity, its humor, its trenchant politicality, and its sincerity is more deserving to be called "folk" than that of the writers above and most others who have worked under that banner

I'm assuming that most readers here know the basic facts about Tom Paxton - raised primarily in Oklahoma (though born in Chicago and lived for a few years in Arizona), he was a fixture at and bona fide member of the Greenwich Village folk scene starting around 1959 or 1960, when he was in his early 20s. Paxton could be even more directly political in his songwriting than the other enfant terrible of the scene, Bob Dylan, though Paxton never seemed as angry, was far wittier, and in most respects a better singer. Paxton is also just plain folkier - the cost of which is that his lyrics make their cases with the direct simplicity of Woody Guthrie but do not soar to the heights of poetry that Dylan sometimes achieved. And as much as I like Dylan in all his guises and appearances - I think I'd rather spend an afternoon chatting with and would certainly prefer listening to a few hours of Tom over Bob.

"The Last Thing On My Mind" is hands down Paxton's best known and most often covered song - its discography and YouTube videography are genuinely stunning in their scopes. And with good reason, I think - just as "Early Morning Rain" (the other candidate for most widely covered folk type song of the era - throw In "Blowing In The Wind" as well) is unmatched in its evocation of the desperate loneliness of the hung over abandoned moments of life, I'm not sure that I've ever heard another song that so simply yet profoundly expresses the sense of impending loss of love, the realization of one's own foolish failures, the quiet desperation of hoping that it's not completely over. We've all been there (I hope) - and Tom Paxton is the guy who captured it the best. Now 71 and still writing and singing, he was justifiably honored this year with a Lifetime Achievement award from the Grammies.

I assume everyone knows that Tom was considered to replace Mike Pugh in the original CMT, the position that went to Joe Frazier (see below). It was said that Paxton's voice didn't blend well with Mitchell's and Mike Kobluk's. Listening to this great artist do his greatest song - I don't think so. I think his range was just too close to Chad's. Certainly he is one great singer :

Joe Frazier of the Mitchell Trio (the later name for the CMT) gave a reading of the song on the group's Typical American Boys album that even Paxton was said to regard as the second best recorded version of his composition. Frazier's baritone takes Paxton's rendering and gives it a slightly darker tone:

I have thought since I first heard this album cut nearly 45 years ago that it was the single best solo by any member of the many folk groups of the time and one of the best recorded performances of the folk era.

The Kingston Trio, at the time late in their initial ten year run, took an experimental and radically different tack with the song. They included it in their Somethin' Else compilation, which included a back-up band with electrified instruments. The KT was trying to catch the folk-rock wave that was threatening to bury them, and if the album itself failed to do so ( as the 24th album of the KT, it was the first that failed to make any sales chart), certainly individual cuts on it caught some attention. There is in their version here an almost Nashville or country sound, several full years before the Byrds and the Flying Burrito Brothers and the Eagles (and even trio member John Stewart) began the fusion that came to be known in the 70s as country rock:

Here is another a great group doing an arrangement very close to the Trio's, complete with a quiet banjo (oxymoron, anyone?) and that is none other than the wonderful Cumberland Trio, shown here in their 2001 reunion concert. After I posted their "Chilly Winds" here in January, C3 moving force Jere Haskew posted on Xroads and emailed me, mentioning that they used the Trio's arrangement for the latter song because they couldn't improve on perfection. I think you'll agree that they render the KT a similar compliment with their performance here:

Now I'm running out of characters in this post - so I'm going to present simply a number of other really fine versions of this classic.


A phenomenal song, one that I'm convinced will still be around in yet another century.

Since leaving the Chad Mitchell Trio in 1966, Joe Frazier (whose solo version is above) has been an Episcopal priest and is currently vicar at St. Columba's Church in the mountain community of Big Bear, California, where for the last three years the parish fundraiser has included a hootenanny show featuring Fr. Joe, George Grove of the Kingston Trio, Art Podell of the New Christy Minstrels back in the day, CMT bassist Ron Greenstein, and myself. Here is Joe taking the lead on a 2012 rendition of "Last Thing," rather more like the Kingston group or Porter and Dolly:

I have the original Kingston Trio version of the song "The Last Thing On My Mind" and I'll be happy to email it to you if you like.
Bobbie Childress
The Kingston Trio Store
http://www.kingstontriostore.com

Thanks, Bobbie! I emailed you at Bob's 'debobwan" address.