"The Song As We Found It Down There Was...Naughty" - "Zombie Jamboree" 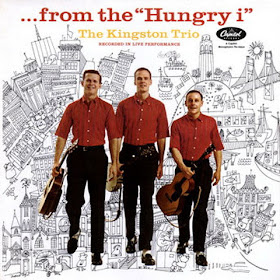 I was struck by a phrase in a Jeopardy! clue the other night about the KT - the Kingston Trio was described as "clean-cut," which we all know was exactly the image that Frank Werber and the guys wanted to cultivate, at the very least to distinguish themselves from the vaguely shadowy politics of The Weavers and probably more especially from the parent-infuriating gyrations and pelvic thrusts of Elvis Presley.

But the Trio started its life as a nightclub act, and that suggested some - suggestiveness, I guess you'd say. Your average 1950s club was a place neither for the wholesome nor the easily-offended. If the comedians' humor had not yet descended to the scatological and obscene level that it routinely has today, it was nonetheless implicitly edgy - Tom Lehrer and the Smothers Brothers and Lou Gottlieb and George Carlin and Lenny Bruce all started out around the same time as the Trio did. Except for Bruce, who was up and in your face, the comics played for "naughty" - and the Trio fit right in, not least because their initial genre was calypso music.

Calypso music proper originated in Trinidad and Tobago, and some purists maintain that Caribbean music from other places like Jamaica and the Bahamas should not be termed calypso. But thanks mainly to New York City's Harry Belafonte, born there of Jamaican parents, the term came to be an all-encompassing word to mean most Afro-Caribbean music.

It's a bit of a wonder that calypso music took off in the relatively uptight world of 1950s America because virtually all of it includes sly double-entendres, political commentary, and really off-color humor. I've always guessed that those Puritan-bent Anglophone ears that we grew up with just didn't pick up on the meanings very well any more than our parents' Big Band generation quite got what those "great balls of fire" were or where Johnny B. Good was go go going. But go back to those three great Belafonte albums from the mid-50s - "Calypso," "Belafonte," and "Belafonte Sings Of The Caribbean" - and listen to the songs with adult ears. You might be surprised. "Judy no drownded Judy lie in bed" indeed, and "Matilda run Venezuela" with more than the guy's money; "Angelique-O's" mama got to take her back to teach her all the things she lack - and so on.

While Kingston Trio fans recognized the sly, eyebrow-raised humor of "Ah Woe, Ah Me" from Back In Town - I wonder how many picked up on Lord Intruder's little quips in "Zombie Jamboree." Intruder was the stage name of Winston O'Connor, born in Tobago into the original calypso tradition. (There really was a Lord Invader, but he didn't write "Jamboree" - and the 12 Penetrators never existed except in Dave Guard's scripted and slightly bawdy song intro. The "Conrad Eugene Mauge, Jr." of the copyright is just another of O'Connor's stage names.) Lord Intruder is poking fun at expatriate Caribbeans (like Belafonte's parents) who lived in New York - hence the Long Island locale of the song and other pretenders to his throne ("some of them great Calypsonians"). But Intruder's reference to the "season was Carnival/They got together in Bacchanal" leaves no doubt about the song's intent.

Take the lyric from there. The female zombie of the song is clearly bent on seduction with her quart of wine - and Intruder's humor becomes clearer when you consider the rather literal implication of "an old bag of bones I cannot love" when being "belly to belly." The unexpurgated lyric also apparent had a different one syllable word than "after you kiss this dead zombie."

But our "clean cut" Trio weren't going to belabor those points. They sang the song for fun and money and let the audience make of it what they wanted:

This has always been one of my all-time favorite trio performances.

The current Kingstons also do a delightful job, showing respect to their predecessors' arrangement while leaving their own distinctive stamp on it:

Many Gen Xers are unaware of the KT's connection to the song and know it primarily from the 1990's vocal group Rockapella, who has perhaps fifteen different recorded versions on YouTube. They keep the song fun but take it further from its roots:

Last December I included Alvin and the Chipmunks' version of "We Wish You A Merry Christmas" as an antidote to the Everly Brother's turgid rendition of the same. We close today with that legendary trio's version of this classic:

I saw Dave Guard live with the Modern Folk Quartet at the Ice House in Pasadena CA in 1976, and the group's closing number was "Zombie Jamboree." It was also, as noted in KTOR and on the Capitol twofer of the KT's first two albums, a song that Dave specifically requested be played at his funeral - the KT Hungry i version. I was delighted to read that the late great Dave Guard thought as highly of that cut as I and countless other fans did.

This humorous video on YouTube uses as its musical background the version by Lord Jellicoe & His Calypso Monarchs:

And a rare video of a live performance of the song from the greatest popularizer of calypso music, Harry Belafonte: